Ethical Counselor: One of Many PR Hats 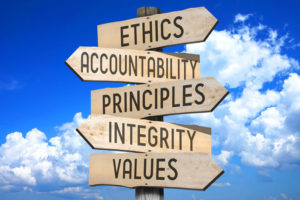 All organizations face ethical dilemmas from time to time. Such dilemmas can be critical decision points that have lasting effects on an organization’s integrity, credibility and reputation.

One of the many hats public relations professionals wear is that of “ethical counselor,” a role that helps leaders arrive at ethical decisions that are in the best interests of their organization and stakeholders.

“We take ethics and the role of ethical counselor very seriously,” says Jason Kirsch, Senior Counselor at PRworks. “All of us at PRworks – individually and as a team – uphold the values of the Public Relations Society of America Code of Ethics, the standard for ethical practice in our profession.”

As noted in the PRSA Code of Ethics preamble, public relations practitioners have a special obligation to act ethically given that public trust is central to the profession.

The PRSA Code of Ethics consists of six guiding values:

Even with a professional code of ethics at your side, ethical dilemmas can still be challenging.

“Oftentimes you aren’t dealing in absolutes,” Kirsch says. “That’s why ethical decision-making is a process, where the entire situation and the effects on all stakeholders needs to be fully weighed and evaluated. It also takes a commitment to open, honest communication and transparency.”

Nicole Keiner, Strategist with PRworks, recalls, “Back in college, in my psychology class, we learned about how to face ethical dilemmas both personally and professionally. The professor provided a practical five-step approach: gather the facts; make a cause and effect prediction; identify the feelings of those involved; ask yourself if you will be OK with your decision 10 years from now; and have supporting facts for the reason a final decision was made.”

Too often, public relations advice is sought to deal with the consequences of a decision – when a decision has already aggravated an issue or, worse, ignited an issue into a full-blown crisis. Certainly, counsel is most effective when it is sought and considered as early as possible.

Optimism as an Organizational Asset