“From market insights to media coverage to launch events, PRworks achieved all of our grand-opening objectives. Targeting the right audience was pivotal to success, and the team was invaluable to connecting us with just the audience we needed to reach. We credit our partnership with PRworks with helping to give our first location in Central Pennsylvania a strong introduction to the market.”

Dave & Buster’s, which operates high-volume restaurant and entertainment destinations throughout North America, needed a partner to execute a public relations campaign for the opening of its first location in Central Pennsylvania. Specifically, Dave & Buster’s sought to: rapidly fill 200 jobs; attract 1,000 attendees to a pre-opening VIP event; mark its official opening with a ribbon-cutting ceremony; connect with area groups and organizations to drive special-event bookings; and build excitement with earned media and social influencer coverage every step of the way.

Leveraging our regional connections and market insights, PRworks implemented a full-scale plan to achieve all of Dave & Buster’s goals – not only to give it a strong start, but to position it well for long-term success, especially among its target audience of young adults.

On all counts, PRworks’ campaign for Dave & Buster’s grand opening hit the mark.

Employee Recruitment — Though recruiting proved to be unexpectedly competitive in Central Pennsylvania compared to other new markets, Dave & Buster’s successfully achieved its hiring goal with the support of PRworks’ media outreach efforts. Multiple broadcast, online and print outlets covered the hiring news, as well as the opening of a pop-up hiring site. 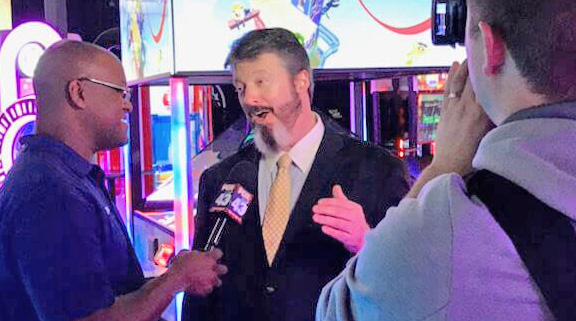 Ribbon Cutting Ceremony — A crowd of guests gathered for the ribbon cutting ceremony, which featured remarks by state and local officials and a grand-opening reception. The ceremony earned additional coverage online and on social media, including via area chambers of commerce.

Community Connections — PRworks successfully laid the groundwork for Dave & Buster’s to become well-connected in the community. Relationships were established for local management with numerous young professional groups and university alumni groups throughout the region, as well as sports teams and visitors bureaus.